“Therefore they that were scattered abroad went everywhere preaching the word” (Acts 8:4).

In earlier days the Bible was maligned by even the religious establishment.  The church itself was against the translation of the Bible into languages of the people.  There were some who wanted the Bible, the Holy Scriptures, for themselves, for their own personal reading.  This evoked bitter and awesome persecution.  This privilege was denied the people for hundreds of years.  Martin Luther was a grown man when he said, “I have never seen a Bible,” and he had been in church all the days of his life.

John Wycliffe translated the Bible into the language of the people.  He wanted it to be possible for anyone who wanted to know the Word to have it.  He said, “I’m going to make it possible that a plowman will know more of the Word of God than the priest himself, than the king himself.”  John Wycliffe died before men could burn him and try him.  But even after his death they exhumed and publicly burned his body, then cast his body as ashes upon the River Swift.  If anyone was found with a Wycliffe Bible , the Bible was hung around his neck and he was publicly hanged and burned.

What the English inquisitors did not realize was that when they burned the body of Wycliffe and scattered his ashes on the River Swift, that river flowed into the Avon, and Avon flowed into the sea, and the sea loved the shores of the continents of the world, including the new land of America.  Wherever the sea carried the ashes of John Wycliffe, there God scattered the truth of the Word of the Living Lord.  Isn’t that glorious?  Over the whole face of the earth the Word of God has traveled.  That’s God! 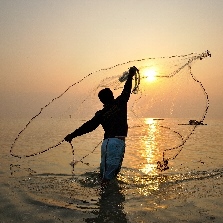